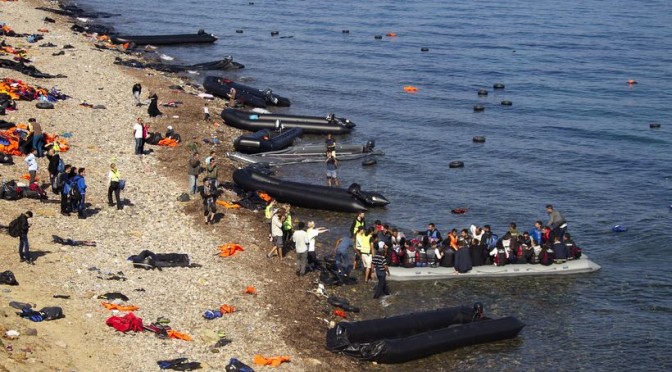 For those coming by boat from Ayvalık, Turkey, the first thing they might see of Europe is an orange life vest waved at the Greek shore: life vests left behind from those who arrived before them, used as wigwag signals by self-organised helpers. If the arrivals manage to head for such a place, they will find some basic assistance with landing as well as some food, tea, and clothes. Some can’t wait to leave the vessels, even if they get wet. The general feeling of overwhelming relief to be on European soil seems to outweigh the exertions, even if helpers (mostly referred to as “volunteers”) say they often receive people suffering from hypothermia, apathy and weakness, showing signs of trauma. Much has been reported recently about the situation in Lesbos and the nearby island of Chios, where thousands of refugees land each week; and much has been written on the risky passage from Turkey to Greece as a whole.
What needs to be outlined, though, is that again, like in other places on the Balkan Route, it’s the volunteers, people unattached to any organisation, who provide basic needs to the arrivals. But apart from the implications of this policy of inactivity, this report also brings forward stories of those who were trafficked by Turkish smugglers, how they were treated by Turkish coast guards, and how this is a direct result of European politics of “migration management”.

Food, Tea, Emergency Blankets
“I want to make this point clear: there is no one here but volunteers, no one but self-organised people of all kinds of political and religious attitudes, of all countries and regions of the world”, one of the helpers wrote in a letter to bordermonitoring.eu. Having been part of the group “lighthouse” who welcome the arrivals after they reach shore, he concludes: “If there weren’t loads of volunteers coming to the island right now, doing what we do at the coast all day and all night, there just wouldn’t be anyone doing it. The refugees would just starve, freeze, without clothes, without a clue where the hell they actually are, without even meeting a friendly person when they set foot on European ground”.

Members of the group “lighthouse” give first aid to the arrivals, clean tents, cook tea, bring hot food and hand out dry clothes, although often, there just isn’t enough for everyone. Here, on the northern side of the island, the refugees can stay one night before they have to continue their journey towards official reception structures. The volunteers have mixed feelings about this very departure from a place where the arrivals were welcomed by non-official structures. Our correspondent points out: “They leave, thinking of Europe as the Holy Land, not knowing that their next stations on the island are nothing but horrible prisons where they will be parted, starving, freezing, not knowing when they will be allowed to leave”. Lesbos has two registration centres (soon to be known as “hot spots”), in Moria and in Kara Tepe. Apart from other astonishing facts about these places, again the lack of provision is ubiquitous. People have to stay out at night, sleeping on the ground in wet clothes.

The controversial aspect of this deficiency is that both centres are part of the new plan of the European Union to install those very “hot spots” at the external borders of Europe. Twelve are planned in total. So looking at these dirty cages, confronted with the atmosphere of a permanent state of exception and martial law, one might have the future of (forceful) refugee accommondation before their eyes.

Before the Passage
And yet, Europe has more “solutions” at hand. What both volunteers and refugees observed in Lesbos is that since the middle of November, less and less refugees have been reaching the island. At this point we cannot outline the full of reasons of why this is happening. Yet the treatment of refugees in Turkey plays an important role in the numbers of arrivals; and that very treatment is very closely linked to European political outreach. The vessels, with which the refugees arrived and which observers described as “cheap plastic trash”, are manufactured only for that very purpose: crossing over from Turkey to Greece. Volunteers who have been on the island for a couple of weeks say that they are fabricated (which means to glue together a construction set made in China) in two factories at the Turkish coast across from the northern shores of Lesbos.

Rumour has it Turkish authorities shut down these factories and the smugglers therefore ran out of vessels. Apparently, some of the boats are even taken back at night to be used again.

Refugees also said that approximately 100,000 people are waiting in the Turkish mountains to reach the coast and get from there into a vessel, at the mercy of the smugglers. Turkish military seems to momentarily hold refugees in those mountain areas, where they sometimes have to wait for days. “Then the military opens the streets for them again, so that there are new waves coming in again. So someday, there is just nothing happening, and then, just in the middle of the night, hundreds of refugees appear on the Greek coast, needing a place to sleep, food and dry clothes”, our correspondent wrote.

Turkey itself seems to have increased border enforcement and has all but closed its borders to Syrian refugees [1]. Human Rights Watch reports on push backs and detentions of Syrians as they tried to cross. The intensified Russian-Syrian airstrikes led to a new wave of people forced to leave their homes – the Turkish policy to intercept them at the borders, though, drives even the sick, the elderly, the injured and pregnant women to choose more clandestine routes into Turkey, one of which are the mountains of Antakya. There, they have to cross with smugglers at night, Human Rights Watch report.

THE EU’s “Action Plan”
Turkey has, as of by November 2015, taken in around 2.2 millions refugees. Of these, 420,000 departed for Greece in 2015. This early October, the EU readopted negotiations with Turkey to reduce migration to Europe. Apart from visa liberalisation, these negotiations with Turkey include a possible €3 billion aid package supporting efforts to further cope with the arriving refugees [2]. Ironically, this agreement is conditional on stopping the migration flow to Europe, which also means that Turkey will be confronted with the prospect of these people potentially staying within Turkish territory. So, from a national point of view, there’s little wonder on the push backs to Syria; yet, this must be seen as a continuation of Europe’s attempt to stop migration at any cost.

In Germany, the Interior Minister recently suggested a rigorous constraint of family reunion for refugees whose status is determined by the regulation of subsidiary protection. This paints a terrible picture: those who saw entering Europe through family reunion as their only safe choice will have to find another way: the elderly, pregnant women, children, the disabled, the injured, the weak. Not only they will have to set off for a dangerous and exhausting journey themselves; they will now have another crossing to fear, with an uncertain fortune.

A few days ago, we posted an article which told the necessity to monitor the European authorities and policing activities. But this, we can only do within Europe. There are direct consequences of the European fencing-off politics that are imposed on the refugees way before they reach European territory.

Based on reports from volunteers who spent the past weeks in Lesbos.

[2] http://www.statewatch.org/news/2015/oct/eu-com-eu-turkey-draft-action.pdf . The plan provides for measures to improve the living conditions of refugees and support humanitarian assistance to them. Also, though, it plans to “address key factors that push the refugees to move from Turkey to the EU through irregular channels in search of alternative places of asylum“ and to „prevent further arrivals of irregular migrants to Turkey and irregular departures of refugees and migrants from Turkey to the EU“.