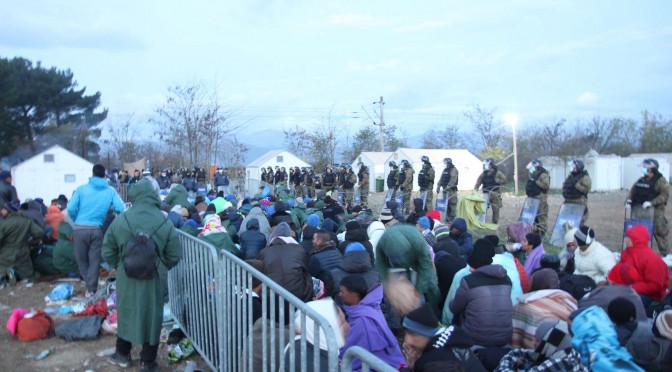 When we heard about the decision of Slovenia, Croatia, Serbia and Macedonia on the 18 th of November to only give access to those coming from either Syria, Iraq or Afghanistan and after getting
reports of the worsening situation at the Greek-Macedonian border, we decided to leave Belgrade heading for Idomeni where at the time of writing at least between 1000 and 2000 migrants are
stranded still.

Belgrade
In Belgrade we met migrant groups of mostly young Afghan men arriving every day by bus from Dimitrovgrad, a transit town at the Bulgarian-Serbian border. They spend their time in a park near
the main station waiting for money transfers from home because many of them got all their savings stolen in Bulgaria. The longer route of crossing Bulgaria from Turkey to reach Serbia is an alternative route of travel towards central Europe that is mostly chosen by young and fit men. Due to the high numbers of
deaths in the Aegean Sea, some people choose this presumably safer passage. Reports from the people arriving in Dimitrovgrad tell another story though: Almost everyone who went through Bulgaria
encountered harsh police brutality – a lot of people arrive with broken limbs or noses – spent time in prison and/or was robbed of all valuables. This suffering as well as the deaths at Sea have their direct cause in the European border regime – since the EU refuses to provide (safe) ways of travel to and through its affiliated countries people have no other options than to use illegalised means to go where they want, often having to put their lives in the hands of facilitators.

Preševo and Miratovac
Arriving in Preševo, the transit town on the Macedonian-Serbian border, a member of a volunteer organisation told us, that the tense situations of the previous days had totally changed. Before, migrants had to stand densely packed in a hundreds of meters-long queue to the Serbian registration point while being barely able to leave the queue, having access to only less than ten toilets. Now
waiting times have decreased a lot and people are less obliged to queue endlessly. The Red Cross only provides around 1000 meals a day even though there are much higher numbers of people per day. This need has to be covered by volunteers who give out cold food and snacks to the people because they are not allowed to cook. Volunteers also bought thousands of rain jackets for bad weather with the little money they have. Big organisations like the UNHCR or the International Red Cross are not as short of money and would be easily able to provide for everybody. The buses that bring the people to Preševo arrive from Miratovac, a village nearby, that was still run
entirely (!) by volunteers as of last Friday. Those migrants who were allowed to travel through Macedonia arrive by train in the Macedonian town of Tabanovce. From there, they must walk the
roughly four kilometers to Miratovac because for unknown reasons the bus shuttle to Preševo is starting in Miratovac instead of in Tabanovce and only goes between 07:00 and 23:00. Again another unbearable decision – especially for the weak, elderly, not-able-bodied and for all those with children. Volunteers have rented two empty shops in Miratovac out of which they hand out free food, drinksand information to the people arriving. In the night, people have to either wait for the morning, walk the eight kilometers to Preševo or take a taxi. It is absolutely absurd that people are forced to walk the distance between Tabanovce and Miratovac without any support on their way – but with police checkings! A burden to migrants which could be easily lightened.

Idomeni
When we arrived to Idomeni, non-Syrians, non-Iraqis and non-Afghans had been denied access to Macedonia already for three days and because of that, had already staged an ongoing lively protest against the decision to keep them there: People were (and still are!) blocking the rail tracks that lead into Macedonia, shouting slogans and holding up signs with their demands. Each day there are coming busses bringing more people that are not only Syrians, Iraqis and Afghans. Therefore the group of migrants stranded in Idomeni increases everyday – counting more than 2000 people. Like in other camps there is not enough sleeping places – or even shelter – for everyone, both the showers and the food offered, are cold and for getting the daily snack, people need to stand in a queue which is most of the time more than hundred meters long. The United  Nations‘ agency for refugees (UNHCR) does not seem to try to change any of this for the better. There is no meaningful scandalization of the separation process, rather we witnessed members of UNHCR and other organisations actively supporting the police by managing the crowd. “One by one!” sounds from the megafon of one of the “helping” people standing next to the queue looking for order. We witnessed a lot of power among the  protesters who used different means to show their anger, dissatisfaction and also desperation about their unchanging situation. While some groups shouted loudly and sometimes angrily at the border guards, others turned to silent forms of protest and initiated a hunger strike. A group of Iranians even sewed their mouths shut. We were often told by individuals that they would rather die than go back to their countries of origin. The will and the determination to cross this border, were all around. The people in charge apparently want to split the different migrant groups trying to drive a wedge between those who are attributed as migrants from non-war zones and those who officially have the right to flee, currently. Trying to keep the migrants and their protests down, they force the smaller groups to not cross the named borders, as it is assumed that they will not be able to start a revolt big enough to break through the police chains. Nevertheless, this attack on the current power of the migration movement can’t stop the people’s resolve to reach their destination countries. We are in full support and solidarity with the migrants and all their different means of protesting. The borders have to be opened now and for everybody! There is no alternative as the migrants will not just stay in Greece or turn back to their country of origin.

The Moving Europe Bus is a project by Welcome to Europe, Forschungsgesellschaft Flucht und Migration and bordermonitoring.eu. The aims of the bus are to document the situation on the Balkan route, to provide information for people on the move, and to strengthen political networks along the route.