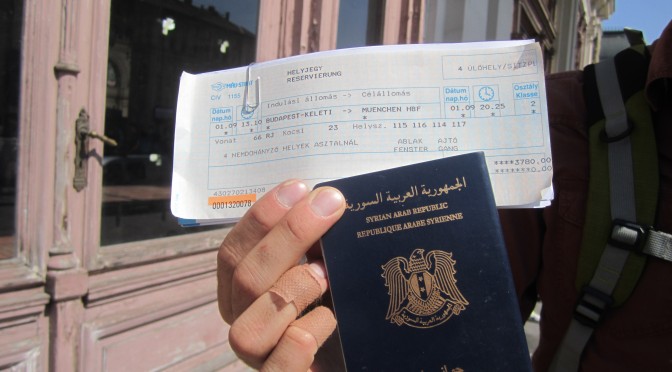 We stopped to report on the live ticker.

But we will continue to report on Bordermonitoring Hungary

20:01 Csaba Hende, Minister of defense, has just resigned after the national security cabinet had a meeting about the fence.

13:10 According to Hungarian police, they arrested 2.203 people at the Serbian/Hungarian border in the last 24 hours. Numbers are increasing again.

19.54 A convoy of cars from Graz (Austria) will arrive in Röszke in about half an hour.

18.34 Article about the convoy which left from Vienna this morning.

17:15 There are not many refugees at Keleti at the moment. Cars and trains permanently transport them to the border.

14:12 According to No Borders Serbia nearly 1.000 refugees who started last night at 10 pm by train from Belgrade to Subotica (just over the Serbian border with Hungary) were stopped at the train station in Subotica.

13:10 This night only a few hundred refugees slept at Keleti, we were there. Refugees can still use trains to Hegyeshalom and cross the border to Austria there.

More than 60 buses arrived at Keleti train station. Police blocked the streets around the train station because there was a football match between Hungary and Romania in the evening and nationalist football fans announced to attack the refugees at Keleti. We recorded this video at about 0.15:

13:22 We got the information, that the first buses arrived in Austria.

15:55 The first 250 refugees from Budapest arrived in Munich around midday. There is a warm welcome for them. Bavarian police is expecting 5.000 to 10.000 the next days.  Christoph Hillenbrand, President of Upper Bavaria (the region where Munich is located), stated „humanitarian management“ is more important than legal questions or registration at the moment. Photos from Munich.

23:41 It has been circulating for a while in the international media, that most of the people at Keleti are not registered in Hungary. This is just not true. The overwhelming majority had already given their fingerprints directly after they crossed the Serbian/Hungarian border because Hungarian police forced them to do so. Furthermore, it is not true that under the Dublin-Regulation Hungary is obliged to prevent the refugees leaving the country. The logic behind the Dublin-Regulation is another one: A state has to take back a person after an irregular border-crossing not already preventing it.

21:53 Actually, there are two #marcheofhope right now. One left from Keleti with about 2.000 people and walks on the highway.  One left from Bicske on the railways. We don’t know it the people on the Bicske-march were in the blocked train or in the Bicske-camp before or both.  Permanently updated map here. Drone footage about the march from Budapest:

21:41 Even though thousands of refugees left with trains and the #marchofhope thousands still are at Keleti. This video is from 8 p.m.

17:34 There are reports and footage on twitter of a march of 300 refugees that have broken away from the train in Bicske. That would make the second march.

17:17 Several sources reports attacks by football hooligans on refugees at Keleti, police is intervening, refugees are fighting back. index.hu is reporting the first death in Bicske: a 50-year-old refugee from Pakistan fell and hit his head. We are trying to confirm, while there are reports of heavily armed riot police gathering in Bicske.

16:52 More and more observers of #marchofhope estimate participant numbers in the several thousands, not just some hundred.

16:47 Nazi attack at Keleti, fire crackers thrown into a group of refugees. No injuries we know of, and police protected the nazis as they were confronted by the refugees. 14:29 On a side note. According to Hungarian police, apprehensions of refugees at the HUN-SRB border in the last 24 hours reached 3313, that is an all time high. That fence is sure working out well. 14:14 The 300 refugees that have escaped from the camp in Röszke have been reapprehended by the police.

13:39 We hear that at least 1.000 refugees have just started a foot march from Budapest to Austria, they are currently on a bridge crossing the Danube.

12:32 discontinued, so in short: situation unchanged, train still surrounded, refugees are shouting slogans. A lot of media present. [13:41] the live stream seems to be back online.

23:58 Situation has still not changed, but other refugees that have been pulled from later trains also refuse to be transferred to the camp. In the meanwhile the deputy director of OIN, the Hungarian Migration Agency, threatened the refugees in the train with deportation, as their refusal to leave would be interpreted as non-cooperation and would thus void their asylum claims. Empty threats of a bureaucrat.

21:50 Situation is unchanged in Bicske, refugees refuse to be transported to the camp. All westbound trains from Budapest pass through Bicske, the police is stopping them and searching them for refugees, who are then taken out of the train.

20:21 Quick info from Bicske camp. Just now, two busses pulled up, each with at most 10 people inside. Bicske is an open camp that was mainly used for recognised refugees (a so called „integration camp“) and consists out of some barracks, surrounded with barbed wire, but open, i.e. during its use in the last years, camp inhabitants were free to come and go.

18:31 A video from Bicske, from 16:45. The situation has not changed so far. We suspect that the police will not move before darkness has fallen and the journalists have left.

16:17 We are reporting from Bicske. The train that was stopped there around noon is still in the train station. The whole train is surrounded by police, refugees are however allowed to leave the train and are given water by the police. The train consists of six carriages, we estimate several hundred refugees in the train, with many children amongst them. From the train, we can see hand-written posters with slogans such as „no camp“ and „freedom“ written on them. Occasionally, there is chanting of slogans like „Germany, Germany“. There are several journalists with cameras present, and we count 5 busses on stand-by for transporting the refugees. But for the last 4 hours, there has been no movement.

15:15 smaller protests are starting in front of the train station.

14:02 We hear reports of physical protests in Bicske, as refugees feel betrayed and refuse to enter the camp. We are trying to get to Bicske to confirm, so stay tuned.

Here is a picture from Budapest train station announcing suspension of all international trains, and a video from today showing the situation at the train station. 13:09 Picture of the train that was boarded by refugees in Budapest this morning. „Pan-European Picnic Sopron 2014. Europe without borders for the last 25 years“ 12:47 We just learned from a reliable source that the train to Sopron was stopped 30 km outside Budapest, in Bicske, where an open refugee camp is situated. Police has evacuated the train and all refugees were transferred to the camp.

12:36 We are back with the live feed from Hungary, and we decided to switch to English. As different media have already reported, the Budapest Keleti train station is open, refugees are back inside and are boarding trains. However, it seems that all international rail connections have been suspended. We estimate that there are still several thousand refugees around the train station here.

Since there are no international trains, refugees take the regional train to Sopron, a border town with Austria.

Ironically, Sopron was the site of the Pan-European Picnic, a peace demonstration on the 19th of August 1989 credited as a significant event contributing to the lifting of the Iron Curtain. To quote Wikipedia:

At the picnic several hundred East German citizens overran the old wooden gate, reaching Austria unhindered by the border guards around Árpád Bella. The Hungarian borders were opened on 11 September, and the Berlin Wall fell on 9 November. — Wikipedia (en) (de)

So how about a Pan-European Picnic 2015?