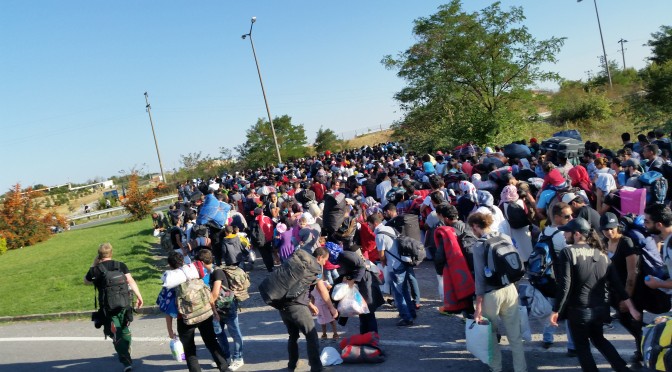 For 5 days in Edirne, Turkey, around 3000 thousands migrants (mostly syrians but also Aghanis, Iraqis and others) gathered, following a call started on a Facebook page („Crossing no more“), to ask for the Turkish-Greek border to be opened for them. They refuse to risk their lives in the Aegean sea anymore to reach a European country where they’ll finally be safe, get basic human rights and have a chance to make a life for themselves.

People started to move to Edirne last weekend (around the 10th of September) but very quickly, the main bus station of Istanbul (Bayrampaşa-Esenler) where they were buying tickets and getting on the busses was blocked for them. The police detained them in the bus station itself, preventing them to buy tickets to Edirne. The government declared that now the migrants have to stay in the city where they had been registered on Turkish territory. Which means that it’s now officially illegal for them to move inside the country, especially to Edirne. Currently, hundreds of people are blocked in Bayrampaşa otogar in Istanbul. About 1500 people who could make it to Edirne were blocked as well in Edirne bus station while other 1500 people were in Edirne itself, split in two groups in different places of the city, waiting for the others to join them and start to walk to the border according to their initial plan.

Yesterday afternoon (Friday 18th September), the group of Edirne bus station decided to walk against the police to join the biggest part of people waiting for them in Edirne. After three hours walk, documented by activists and orientated by the police who blocked the shorter road to reach the city, they could meet the other group who walked towards them as well. The meeting occured yesterday night around 9pm on the highway number O-3/E-80 passing on the north of Edirne. Quickly about 300 policemen, soldiers and special intervention forces blocked the two groups gathered on the highway and brought busses in order to drive everybody to a stadium where they could all be detained. The majority of migrants had been pushed in the busses and sent to the stadium in the city center of Edirne. About 500 migrants refused to get in the busses after several negotiation attempts. They demanded to be allowed to cross the border to Greece and nothing else. Right now (Saturday 19th September, 9pm) they are still at the same place on the highway, protesting peacefully and demanding to be allowed to complete their journey until the greek border. Meanwhile, about 600 migrants are still waiting in a park of Edirne center.

So far, more than 1000 migrants are detained in the stadium of Edirne, when about 200 others are still on the highway, about 600 else in the park of Edirne aresurrounded by police who doesn’t let move and around 3000 others again in the bus station of Bayrampaşa in Istanbul.

The activists who met the migrants of the highway recorded their peaceful action and heard their demand to be supported as much as possible to achieve their goal to cross the Turkish-Greek land border. They urgently ask the support and attention of local and international medias and activists.

Update: Later on Saturday, the 19th of September, the police evicted the last group on the highway and brought them to the park near the old mosque (eski cami) in Edirne.