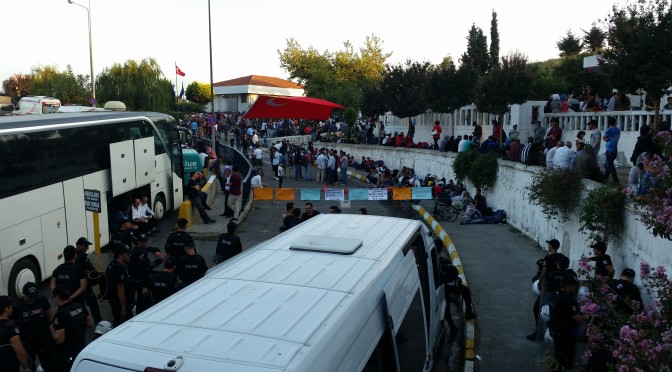 It has been in planning for some time. While many people are trying to escape at Izmir and Bodrum via boat for quite a long time now. Especially in the warlike areas at the borders with Syria and Iraq, the pogroms against Kurdish civilians and hundreds of HDP offices and Kurdish shops destroyed the hope for many migrants to find a peaceful life in Turkey. Yet, after hearing the good news of thousands welcomed to Europe, people have found new hope.  The group called out for a protest via Social Networks and informed Media and humanitarian organizations about it. The first sentence reads as follows:

Because of the death of too many of our brothers and the fatal risks they have to take to cross the border from Turkey to Greece in order to make a better life for themselves, we are planning to gather at the border around Edirne on 15th of September 2015 and claim for our right to cross it safely.

Undoubtedly, the unlicensed protest directed the attention to the situation of the refugees in Turkey. It was planned as a peaceful demonstration with thousands holding signs. Already on Monday night hundreds of refugees left their cities to Edirne. Many tried to walk to the border with Greece at Pazarkule but could not cross it. 250 people were able to reach Edirne by foot and ended at the bus terminal. There they staged a sit-in. Police and Gendarmerie blocked many others from entering the city. Some were convinced to return to Istanbul. More than 1000 people entered again the city of Edirne, but were blocked from going to the border with buses. More than 600 people are currently blocked at the bus station, some of them have started a hunger-strike.

Hundreds of people have also got stuck at the bus station in Istanbul and the police locked the area with barricades and a bulldozer. Currently the refugees are not allowed to buy tickets from the companies. The media is not allowed to enter the scene. During the day the German Chancellor Angela Merkel had a phone conversation with Recep Tayyip Erdoğan, the President of Turkey. In the press release of the German government from Wednesday it is mentioned that they talked about working closer together, tackling the „refugee crisis“ and „combating the criminal activities of smugglers“. This sounds ironic when juxtaposed to another statement, coming from the press release of the Edirne protest:

It’s important to believe that our cause is right and the concerned agencies should take the responsibility to work with migrants. Therefore, we prepared a petition that we all invite you to sign and support.

The protest of the revolting people at the Istanbul bus station is targeting especially Turkey and Germany, by holding Turkish flags and signs with slogans addressing Germany’s Chancellor. Other signs are thematizing the problems, which migrants have in Turkey. They state that no more people should be let to drown. Today again more than 20 people drowned at the coast in Bodrum. Even in the Istanbul quarter of Aksaray the selling of life jackets has increasingly become a business.

The protest of migrants, fleeing from broken homes and looking for a new life this time  got more attention than the exodus of more than 30 buses, that tried to move through the Turkish-Bulgarian border in June 2015. During the new occupation of the bus stations in Istanbul and Edirne, the migrants stated that they will not surrender until they are allowed to cross the border peacefully. Winter is coming soon, so there is no doubt that the people who are reclaiming their rights to move freely and who have been caught into the limbo of a political and humanitarian crisis, will be trying their luck by the end of the long summer of migration. They have nothing to lose.